As of May 1, 2018, over 5,200 stock positions were held by the 55 funds classified as activist investors. That’s according to data from WhaleWisdom.com. Most of these stocks will be unremarkable performers, generating little alpha for the fund or investors.

But hidden among the many stocks in activist funds’ portfolios are a few positions that will be big winners. Like Shutterfly (Nasdaq: SFLY), an online photo book company which first appeared in the portfolio of the activist hedge fund SpringOwl Associates on November 15, 2017 (13F for quarter ending September 30th, 2017). Following SpringOwl into SFLY at $40, would have led to a 126% gain less than six months later.

A simple strategy designed to identify and profit from the most promising small cap stocks held by activist managers would have averaged 26.3% annually since 2009. That’s a compounded return of over 690% through April of 2018.

Activist managers target companies with share prices viewed as undervalued compared to the true value of the company’s operations and assets. After accumulating a large block of shares in the target company, the activist manager then goes public with a plan to engage management and force corporate changes intended to close the valuation gap and generate profits for the fund.

However, not all public companies held in activist fund portfolios are actively targeted. It seems that the best activist managers also do very well with the passive investments held in their funds.

It’s apparent that independent investors who follow the moves of activists in and out of target stocks can generate substantial profits.

It should come as no surprise that following the investments of activists can be profitable. Academic studies, along with empirical evidence, have shown that on average, activist managers generate positive returns for themselves and their followers. The challenge for investors is zeroing in on the few specific positions most likely to generate significant alpha.

The 13D Activist Fund is in the business of profiting from activist campaigns. The mutual fund manages a portfolio of what it deems the top activist positions. According to its website, the fund has averaged a 15.78% annual total return since its inception in 2012. That’s after annual fees that range from 1.51% to 2.51%. Over the same period the S&P 500’s average total annual return has been 15.11%

While the Activist Fund has produced solid returns, it’s apparent that independent investors who analyze the moves of activists in and out of target stocks can generate substantial profits on their own.

According to Activist Insights, from 2009 through 2017 the total compounded “follower return” of activist investors was about 240%. In 2017, the average follower return from all stocks targeted by activists was 13.2%. That compares to the S&P 500’s total return of 21.8%.

The follower return is based on buying when an activist files a 13D report with the SEC reporting a target position and selling when the activist discloses exiting the position. Of course, to achieve the average follower return investors would have had to invest in every one of the nearly 800 13Ds filed by activists last year. Good luck with that…

Using WhaleWisdom.com’s 13F backtester, I was able to create a simple hypothetical activist-following strategy that generated a 26.3% annualized return since 2009 following all of the famous activists managers, as well as some more obscure activist managers. This strategy holds a portfolio of 10 stocks which represent the activists’ highest conviction positions. It rebalances four times a year — not an onerous task.

Here are some unique aspects of this strategy:

Many top performing activist managers are not famous.

I reduced the 55 funds WhaleWisdom categorizes as activist investors to 25, by eliminating very small funds with less than $100 million under management. I also excluded funds holding fewer than 11 positions and more than 100 positions. I further reduced the list by deleting a handful of funds with the worst historical performance. Below are the funds I was left with. Most of these activists are widely known, but some are more obscure, despite having shown good performance.

Using WhaleWisdon’s backtester, I created a portfolio of the top 10 positions held by these leading funds. I chose the “combined percent of portfolio rebalancing option” for rebalancing this portfolio. So, if stock XYZ represents 15% of fund A’s portfolio and 20% of fund B’s portfolio, then XYZ is 35% of the combined fund holdings. The top 10 combined holdings are then equally weighted, with each one comprising 10% of the portfolio.

The activist portfolio is rebalanced quarterly based on new 13F filings. 13F reports are mandated by the SEC — all funds managing $100 million or more must disclose their long positions within 45 days after the end of a quarter. You can find more information on 13F filings here.

Buying right after a 13D filing typically means chasing a stock that has surged higher in recent days.

Most activist followers only focus on 13D filings. Once an activist acquires 5% or more of a public company, it must file a 13D disclosing this holding within 10 calendar days. Investors keen on replicating activists’ positions typically buy as soon as possible after the 13D filing.

However, buying immediately after a 13D announcement typically means chasing a stock that has surged higher in recent days.

The price of an activist targeted stock typically rises in the days before a 13D is filed.  Whatever the reason – the activist’s buying driving shares higher, insiders catching word of the upcoming filing, or a combination of factors – target stocks usually go up just before a 13D activist filing. Then comes the 13D announcement, and the price spikes even higher. Depending on many factors, including the notoriety of the activist and market conditions, a target stock can climb 10%, 20% or even more from the period days before a 13D disclosure to the day after the filing.

The WhaleWisdom activist strategy gains an advantage by entering activist-followed positions quarterly when 13Fs are filed. Reactions to 13F filings are typically muted, so basing entries on 13Fs tends to avoid the volatility associated with 13D filings.

Below is a graph showing the performance of a 10-stock equally-weighted portfolio combining the top 13F holdings of the 25 best activist funds. The portfolio is rebalanced 46 days after each quarter’s end. The light green is the activist portfolio total return, the dark green the S&P 500 total return.

Since 2009, the hypothetical strategy has a cumulative total return of 690.6%, 2.68X the S&P 500’s total return. Note that standard deviation of returns is 17.8% for the WhaleWisdom activist strategy compared to 12% for the S&P 500. So, this strategy would have achieved almost triple the S&P 500’s performance with only 50% more volatility.

I’ve tweaked this strategy in a few small ways: I’ve excluded the ticker IEP from the backtest. That’s the symbol for Icahn Enterprises L.P. common stock. It kept popping up in the portfolio, and I decided I’d rather invest in Icahn’s picks and not his fund. Also, I’ve eliminated MSFT, FB and all ETFs, as I can get exposure to these securities elsewhere. WhaleWisdom allows the user to exclude any number of tickers from the backtest.

There’s one more change we can make that may result in even better results.

The next chart reflects one alteration to the above strategy: We restrict the stocks purchased to between $250 million and $2 billion market cap. We don’t invest in mid-cap to mega cap stocks with market caps of $2B and higher.

Also, we skip the micro-cap stocks with less than $250 million market cap.

Backtesting this small cap activist strategy back to 2001 shows equally impressive performance — a 21.6% annualized return and a cumulative return of 2705%.  The period coming out of the 2008 downturn was very strong for small cap stocks that had been decimated in the bear market. 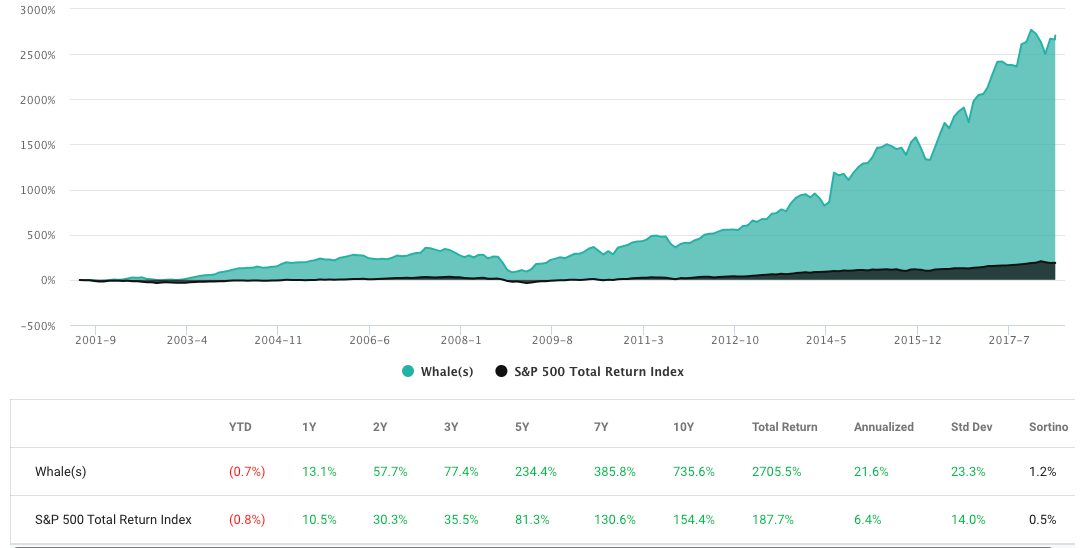 Will these activist strategies based on 13F filings perform in the future like the historical backtests? That’s the million-dollar question.  However, the best activists are skilled value investors, adept at finding cheap companies and closing the valuation gap by forcing corporate change. This is a formula that has worked for decades and is likely to work into the future, though it’s not immune to bear markets.

I encourage anyone interested in activist investing strategies to test their own ideas for uncovering hidden opportunities in the 13F filings of activist investors.