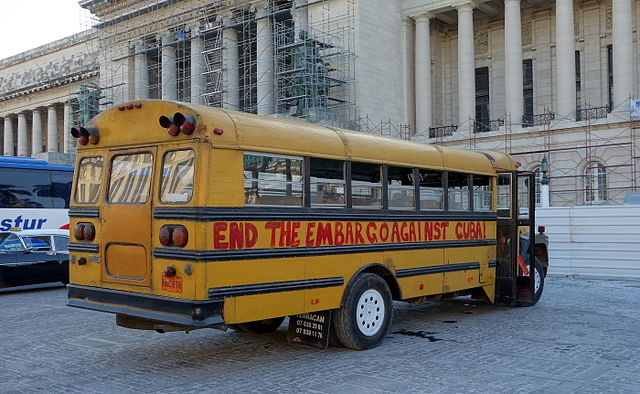 On April 30, Phillip Goldstein disclosed a 9.9976% position in Herzfeld Caribbean Basin Ltd. (CUBA). In a 13D filing, Goldstein said that if the founder and manager of the CUBA closed-end fund was to “dissolve” it, shareholders would gain “about 25%.”

Goldstein is the co-founder and principal of Bulldog Investors, an activist hedge fund with $509 million in assets, focused primarily on closed-end funds (CEFs).

As of April 30, the value of CUBA’s portfolio of publicly-traded stocks was worth about $47 million. With 6.13 million shares outstanding, CUBA’s net-asset-value (NAV) per share was then $7.68. So an investor buying CUBA at $6.10 (Monday’s closing price) is buying the CUBA portfolio at about a 20% discount. Were the fund to be dissolved, shareholders would receive NAV — a 25% gain.

Closed-end funds (CEFs) are similar to Exchange Traded Funds (ETFs), with one major difference. While the price of ETFs usually closely tracks the value of the ETF’s underlying investments, a CEF may trade at a discount (or a premium) to the value of the assets in its portfolio.

Here was CUBA closed-end fund’s top ten holdings as of 12-31-18, according to Herzfeld Advisors:

An investor buying CUBA closed-end fund at $6.10 is buying the fund’s portfolio at about a 20% discount.

Buying a collection of valuable assets at 80 cents on the dollar is great — do that consistently and you’re bound to get rich. But the problem with CEF discounts is this: They can persist for a long time.

Which brings us back to Phillip Goldstein. Goldstein co-founded Bulldog Investors in 1992 and remains co-principal. Bulldog’s modus operandi is to buy stakes in CEFs that trade at sizable discounts to NAV. He then persuades (or coerces) management into taking steps to alleviate the discount, resulting in profits for his investors.

But Goldstein’s 13D on Herzfeld Caribbean was filed with personal funds — possibly because CUBA, with a market cap of $37.42 million, is too tiny for his fund. The CEF’s average daily volume is just 10,000 shares.

In a lengthy “supporting statement” submitted with the 13D, Goldstein chronicles Thomas Herzfeld’s continual assertion that a lifting of the US trade embargo of Cuba will lead to gains for the CUBA closed-end fund. He begins by saying:

Tom Herzfeld launched The Herzfeld Caribbean Basin Fund 25 years ago as a vehicle for U.S. investors to benefit from future investment opportunities in Cuba. Accordingly, he chose “CUBA” as its stock symbol. Since then, Tom has generally been upbeat about the prospects for lifting the trade embargo that bars Americans from investing in Cuba. For example:

Goldstein goes on to list a series of quotes by manager Herzfeld dating back to Feb. 1999 reiterating positive developments expected when the US boycott of Cuba ends.

“Republican candidate Donald J. Trump when asked about his openness to expanding his self-branded line of hotels into Cuba, said ‘I would, I would.’….Regardless of who wins the White House, positive dealings with Cuba should continue and progress should be made.”

Yet, the trade embargo is still there. Apparently, investors are fatigued because the price of the Fund’s shares are more than 20% below their net asset value. I reached out to Tom in April to discuss the discount. He responded: “Before any action is taken regarding the discount, we would like to see if US policy towards Cuba is going to change.” Coincidentally, on that same day the policy did change – for the worse — as the Trump administration announced new restrictions on dealing with Cuba that, according to Cuban President Diaz-Canel “pushed the precarious relation with our country back to the worst level.” as one expert on Cuba put it: “The Obama era is over. It’s all over.”

Ironically Thomas Herzfeld Advisors, with over $250 million in managed assets, is in the business of investing in closed-end funds for its clients. Goldstein goes on to say:

I have known Tom Herzfeld for many years and I respect his knowledge of closed-end funds. But, in this case, I think he is in denial. Eliminating the discount can provide the Fund’s stockholders with a gain of about 25%. If Tom was just a stockholder and not the Fund’s manager, I bet he would favor winding it up.

It’s not clear how aggressive Goldstein will be forcing Herzfeld to narrow CUBA’s discount. Between them, Herzfeld Advisors, Thomas Herzfeld and portfolio manager Erik Herzfeld appear to control 47% of the stock.

In 2014, the price of CUBA stock doubled over five days when Obama announced normalized relations with the communist country

In retrospect, the time to have bought CUBA was just before December 17, 2014 –the date President Obama announced the restoration of diplomatic ties with Cuba. The price of Herzfeld Caribbean Basin Ltd. soared from $6.81 to $14 over a five day period. Over that time, the CEF went from a 12% discount-to-NAV to a 70% premium. CUBA insiders, including Thomas Herzfeld, sold $3.6 million of stock into that price surge in late 2014. More recently Herzfeld has been a buyer of CUBA.

Premium/discount to NAV of Herzfeld Caribbean Basin Ltd. (CUBA) May, 2014 through April, 2019

If Phillip Goldstein can’t convince Thomas Herzfeld to shut-down the CUBA closed-end fund and close its NAV discount, then Herzfeld Caribbean Basin shareholders may have to wait for a new administration in Washington to normalize relations with Cuba. Could be a while.