Newell Brands (NWL) stock tumbled 22% over three days, but a long-time lieutenant of activist investor Carl Icahn was buying, picking up $1 million worth on August 8 at $20.50. In total, 3 directors of NWL bought $1.7 million of stock into the downdraft. The purchases were disclosed in Form 4 filings submitted today.

While Newell Brands 2nd quarter results reported on August 6, 2018 were mixed, the maker of Rubbermaid, Crock Pots and Sunbeam products said Monday that tariffs could cost the company $100 million. Newell warned that its operational targets for the rest of the year were at risk as China, Canada and the EU retaliate in response to the U.S. tariffs on steel and aluminum.  NWL stock responded by going into a three-day tailspin, falling from Friday’s price of $26.57 to today’s close of $20.87

Courtney Mather, a director of NWL, was a significant buyer into the weakness. Mather was one of four directors picked last March by Icahn to join Newell’s board of directors. NWL cut a deal with Icahn, snubbing another activist, Starboard Value, which sought its own overhaul of the company.

Mather has served as Portfolio Manager of Icahn Capital LP, the entity through which Carl Icahn manages investment funds, since December 2016, and was previously Managing Director from 2014 to 2016. Mather was at Goldman Sachs & Co from 1998 to 2012, most recently as Managing Director responsible for Private Distressed Trading and Investing, where he focused on identifying and analyzing investment opportunities for both Goldman Sachs and clients. 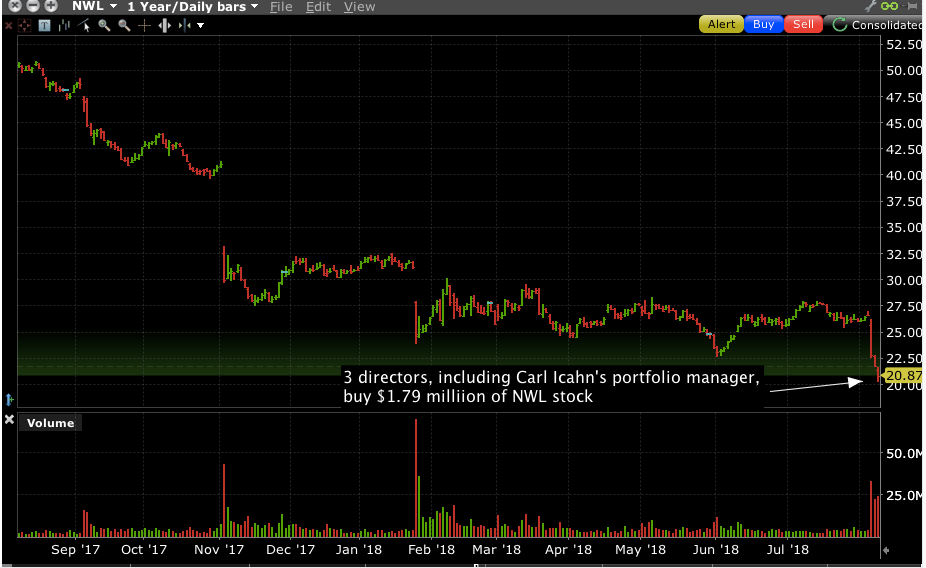 On April 17, 2018 Starboard CEO Jeff Smith said on CNBC: “We do believe that there is incredible value at Newell. It’s a company with iconic brands. It’s brands that we’ve all heard of [such as] Elmer’s glue, Sharpie, Paper Mate.”  NWL stock closed at $27.37 on that date, over 30% above today’s close.

In a statement that accompanied Icahn’s board picks, Newell Brands laid out an accelerated corporate transformation plan that includes the possible sale of some Newell units and other moves aimed at improving financial flexibility, increasing free cash flow productivity and returning capital to shareholders.

As a director of Newell Brands, Mather must file a Form 4 by the end of the second business day after his purchase. So Mather filed rather promptly – possibly as a signal that Icahn Enterprises is on the bid.  Meanwhile, if Icahn is in fact accumulating more NWL shares, he must file a 13D/A within two business days of a 1% or more change in his holdings.

Courtney Mather wasn’t the only insider buying into NWL weakness.  James Craigie, the Non-Executive Chairman and former CEO of Church & Dwight (CHD), another large consumer products company, picked up 11,500 of NWL at $21.33 today. Craigie has a long history of profitably buying CHD stock going back to 2004. However, today’s buy of NWL is the largest ever in dollar terms for Craigie.

The buying by these three veteran, well-connected insiders suggests they believe Newell Brands shares are a good value around $21.