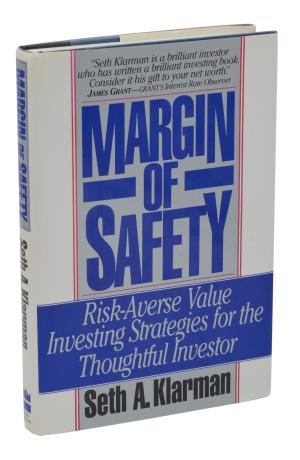 In 1991 the first (and only) edition of Seth Klarman’s book Margin of Safety: Risk-Averse Value Investing Strategies for the Thoughtful Investor was published. Just 5000 copies were printed, and initial sales were slow. You could have bought it for $25. Today, it might be worth $3000.

Assuming you didn’t dogear the pages, highlight passages or spill coffee on the it, the initial hardback printing of Margin of Safety would have appreciated 30% annually.

And if Klarman had inscribed your book, your pristine copy of Margin of Safety might sell for $7800.

Meanwhile Klarman’s hedge fund Baupost Group, which he co-founded in 1991, has averaged annual net returns of 16% since inception, according to the Wall Street Journal. Baupost’s 13F returns since 2001 have averaged 9.4%, according to WhaleWisdom. Value managers generally underperformed during the bull markets of the 2000s.

So, owning Seth Klarman’s book might conceivably have produced better returns than investing in his hedge fund. Who knew investing in books on investing could be so profitable?

A pristine copy of Margin of Safety bought in 1991 returned 30% annually. Baupost Group has generated 16% annual profits to investors over that time

I’ve accumulated an extensive library of investing books over the years, but a quick check of my “collection” yielded only one book that might be worth four figures. (That would be: Day Trading with Short Term Price Patterns & Opening Range Breakout by Toby Crabel. It’s an interesting book and story I’ll profile in a future piece.) But I’ve never considered my investment books to be collectibles. What if over the years I’d bought finance-related books with the idea of building a valuable collection?

Which got me to thinking. Are there investment managers today whose books might make great investments as collectibles? And exactly why did Seth Klarman’s book become so valuable?

Seth Klarman, “The next Warren Buffett.”

When Margin of Safety was published in ’91, Klarman was already an emerging superstar in the investment world. He had co-founded Baupost Group just nine years earlier, and Baupost had generated net returns of nearly 30% annually. But what really raised Klarman’s stature (at least within the hedge fund world) were comparisons to the man considered the greatest investor of all time: Warren Buffett.

There may be a few readers out there who don’t know this: Warren Buffett is the head of the investment fund Berkshire Hathaway and is the 3rd richest man in the world. He’s also humble, plain spoken, has a wry wit and exudes integrity. And Buffett is the king of value investing — an investing style focused on finding serious bargains. Buffett is god-like to value investors.

The term “margin of safety” is a key concept of value investing: It refers to the discount between the price an investor pays for an asset, and its true value. As the margin of safety increases, risk declines, and profit potential increases. In his book, Klarman reiterates Buffett’s famous line: The first rule of investing is “Don’t lose money,” and the second rule is, “Never forget the first rule.”

According to Klarman, “margin of safety” is central to value investing

He elevates margin of safety to the top of value investing principles:

I too believe that avoiding loss should be the primary goal of every investor. This does not mean that investors should never incur the risk of any loss at all. Rather “don’t lose money” means that over several years an investment portfolio should not be exposed to appreciable loss of principal.

How can investors be certain of achieving a margin of safety? By always buying at a significant discount to underlying business value and giving preference to tangible assets over intangibles. (This does not mean that there are not excellent investment opportunities in businesses with valuable intangible assets.) By replacing current holdings as better bargains come along. By selling when the market price of any investment comes to reflect its underlying value and by holding cash, if necessary, until other attractive investments become available.

Like Buffett, Klarman has made his investors and himself billions of dollars. But also like Buffett, Klarman evokes humility. “You need not be greedy,” Klarman says in a 2011 interview with Charlie Rose. “You need to balance arrogance and humility… When you buy anything, it’s an arrogant act,” he says. “And you need the humility to say, ‘But I might be wrong.’”

Two years before Seth Klarman’s book was published, a 1989 Fortune article listed Klarman along with Michael Price, Glenn Greenberg, Jim Chanos, Jim Cramer (yes, that Jim Cramer) and Eddie Lampert, among others, as potentially “The next Warren Buffet.”

A rare book is scarce, desirable and has had an impact on the world.

Three decades laters, all of the investors profiled in the article remain noteworthy money managers and investors. However, only Klarman has come close to matching Buffett’s renown. And of the group profiled, only Jim Cramer has written a book. In fact, Jim Cramer has written a handful of books. Which leads us to a key factor in Margin of Safety‘s lofty price: Scarcity.

Only five thousand copies of Margin of Safety were published. For whatever reason — an inept publisher, indifference by the the multi-billionaire Klarman — there have been no further printings of Klarman’s book. Meanwhile Jim Cramer, a famous television personality, may have a hundred thousand books in circulation. So its no surprise that the most expensive Jim Cramer book (Jim Cramer’s Mad Money: Watch TV, Get Rich) sells for $30. (A Japanese Edition of Real Money goes for $131.)

In the eyes of the owner, they are beautiful and collectible items, even though they do not generate any financial income. Collectors point to cultural and artistic investment not only as a pleasurable activity but also as a contribution to financial diversification…collectors say they are interested in the financial as well as the psychic benefits of their private assets.

According to Rebecca Romney (from the History Channel show Pawn Stars) a rare book is a book that is scarce, desirable and has had an impact in the world. I’d say Margin of Safety qualifies on all three counts.

If you’re serious and passionate about investing, it seems like a natural step to collect rare books by great investors. Certainly books like Margin of Safety can generate nice returns. But a personal library filled with beautiful books containing the ideas of great financial thinkers might be its own reward.

More information on investing in rare books can be found here.