Whether it’s avocados, pairs of socks or flannel shirts, everyone loves a ‘buy one get one free’ deal. And apparently that includes corporate officers.

Chairman Joseph C. Papa and CFO Paul Herendeen of Bausch Health Companies (NYSE:BHC) purchased a total of 40,000 BHC shares on Sept. 14 at an average price of $22.39, spending $896,000. And thanks to a “Matching Share Program” offered by Bausch Health, the insiders were granted an additional 40,000 shares. The granted shares are restricted – 1/3 of the granted shares vest on each of the three anniversaries of the date granted. If the insider leaves the company, he or she would forfeit unvested shares. Also, if the insider sells any of the purchased shares, an equal number of restricted granted shares will be forfeited.

It’s a bullish signal for the stock – insiders putting more skin in the game, albeit at a discount.

More impressive are the Sept. 13 purchases by BHC director Richard de Schutter, who bought nearly $3 million of BHC on the open market at an average price of $23.96. There’s no mention of a matching share program on the Form 4 filed by de Schutter.

De Schutter has an extensive history as a C-level executive and director at a long list of companies. He first bought Valeant/BHC shares upon joining the Bausch Health board in March of 2017. Through May of this year he had accumulated 85,000 shares on the open market at an average cost of $16.13. He received another 62,000 shares in grants as part of his director’s compensation. The most recent 125K BHC purchase increased his holdings by 86%.

Papa and Herendeen also have successful histories buying Valeant/BHC on the open market.

In August of 2015, when it traded over $250 per share, Valeant was a “hedge fund hotel” – a very popular holding of hedge fund managers. Bill Ackman’s Pershing Square, Jeffrey Ubben’s ValueAct and John Paulson’s Paulson and Company were among the top holders. But things went south in a hurry when in October of that year activist short seller Andrew Left alleged that Valeant was using a bogus company-owned network of specialty mail-order pharmacies to inflate sales of its high-priced drugs and to keep patients and their insurance companies from switching to less costly generics. The report called Valeant the “pharmaceutical Enron.”

The stock hit rock bottom at $8.36 in April of 2017. According to Bloomberg, Ackman’s firm ended up losing more than $4 billion on Valeant.

Valeant changed its name to Bausch Health Companies Inc. on July 16, intending to put its scandalous past behind it. The Bausch name refers to one of the company’s most important businesses, Bausch & Lomb, famous for contact lens products. On January 18 of this year, CEO Papa told Bloomberg that BHC was the “turnaround opportunity of a lifetime.”

On September 12, BHC closed up 14% to $23.54 on news that the company had reach a settlement with Actavis Labs, owned by Teva Pharmaceutical (Nasdaq:TEVA), regarding a patent battle over gastrointestinal drug Xifaxan, which is a key part of BHC’s turnaround strategy.

After the settlement news, Jefferies analyst David Steinberg issued a research note saying “One could argue the settlement takes Bausch’s bankruptcy risk off the table given the long runway and greater certainty to future cash flows from the company’s most important drug.” The deal could allow the company to refinance its still substantial debt at more attractive terms. Steinberg kept a buy rating on Bausch Health with a $27 price target.  Also, on Sept. 17 Barclays initiated coverage on BTC with an Overweight and target of $29. 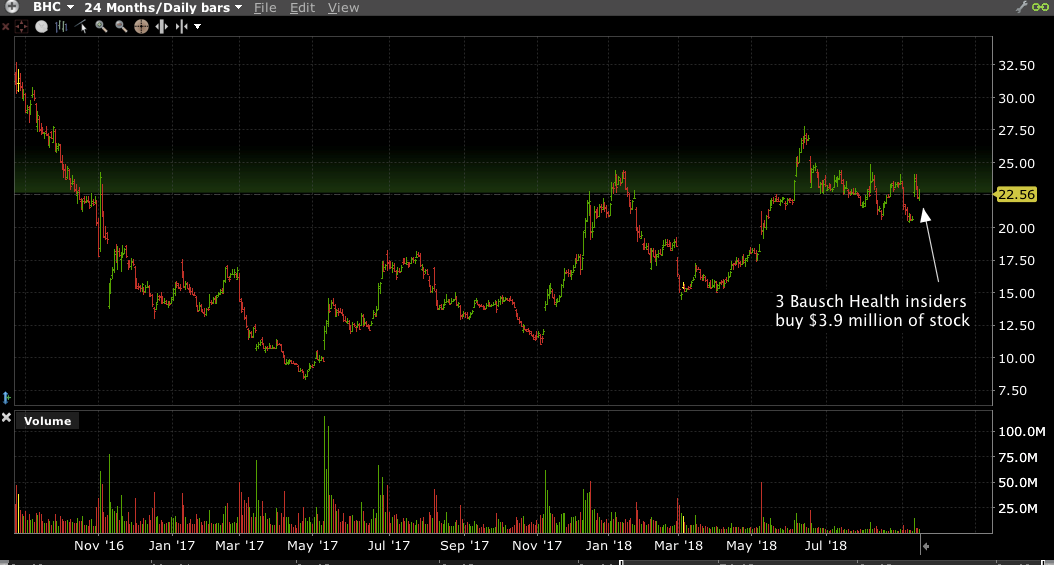